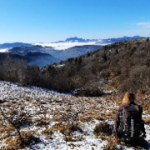 My name is Claire. I'm French and I'm actually doing an internship in Romania in partnership with the Erasmus+ program. I'm working in the Natural Park "Gradistea Munelului-Cioclovina" were the administration is in the city of Deva, located in the middle of the Carpathian mountains in Transylvania.

I will stay here for 5 months and half and I already did half of my time here. I want to share with you my first experiences and discovery about the Natural Park work and the wonderful country of Romania.

Firstly let me explain why I am here. I graduated from an advanced technician's certificate "Management and Protection of Nature" (called BTS GPN in France) and I wanted to continue my studies in this sector. Unfortunately, my skills and knowledge weren't enough for me to have a place in one of the four schools that I wanted and which only have few places each year. Quite understandable to be honest, I only had one graduation and not so much professional experiences or knowledge other than what I learned during my studies. As I get an all gap year, I decided to do something useful in order to have another chance next year. One of my teachers already told me about the Erasmus program as she knew that I liked to travel a lot and go on adventures alone, so it was an easy choice to make for me !

As an ex-student I don't have much financial resources but thanks to the program I can live comfortably during my all staying here, and to be honest the Romanian living expenses aren't expensive for us french people. But I didn't choose Romania for this reason, I wanted to work in a country which still has a lot of wildlife like bears, wolves or lynx because I have a particular attraction to these species and all the work around it (tracking, conservation, management). Of course they aren't the only species I'm interested in, but as in France these species are really rare and vulnerable it's mostly impossible to be able to work about them. Besides, I wouldn't have made a better choice because I clearly haven't been disappointed since the beginning.

Now it's time for me to tell you my story in detail.

I took the plane on the 15th of november during the 2nd quarantine in France, but even if it looks like a fluke in reality I had to stay in quarantine for 14 days because of the Romanian legislation on the Covid situation.

However, time flew pretty fast and at the beginning of December I had my first day at the Office. I met my official training master Catalina who is in charge of ecological education and my second training master by default, Robert, who is the biologist newly employed by the Park.

I'm gonna pass the explanations about the office work stuff that I did at the beginning and switch to how you the most exciting part of the biologist's and ranger's job : The field work !

Let me just explain the purpose of their job. The Natural Park has a lot of different things to do and one of them is the conservation and the management of nature, I'm talking here about the ecosystems (mostly forests and alpine meadows to make it simpler), the fauna and the flora which live in it. The Park's rangers are in charge of the fauna and flora inventory and monitoring within the Park. Everydays they are going on the field to search for signs of presence of the monitored species (bears, wolves, lynx, wild cats) and they have to fulfill reports every week about what they saw. The biologist works on the reports and collects all the datas to make evaluation about the species evolution and repartition but also for future management measures. He's going sometimes on the field to show new techniques or to participate in specific species research.

Of course, that's a really really short and simplistic description of what they do but I would be really long for me to explain in detail and probably a bit boring for you ! They do a lot of things with precision which require plainty particular knowledge.

I got the chance to go on the field one day in my second week and all days the next week to work on monitoring with the biologist and different rangers each day.

Robert, the park's biologist, by sharing with other biologists from Bucharest, put in light different interesting transects to monitor within the park. These transects are selected because we know for sure that animals cross it, as bear and wolf. Transects are 1 kilometer long and can be prospected in a perimeter of 1:1 and are generally situated on human's roads.

Indeed, big carnivores, bears and wolves, use human's roads because they are easier to access. On the other hand, prey prefers to create their own path within the forest. To put a photo trap for instance, it's interesting to put the camera on the crossing between these two types of paths : between a frequented road and a created path. These 2 types of paths are obviously used by prey and predators but we found more often bear tracks on human's roads.

The days after the first snows are really crucial to find good new animal's tracks and paths. It goes without saying that footprints are extremely visible, easy to identify and to measure.

As Robert is new in the park, He wants to reorganise the ranger's work by going with them on the field to familiarize them with the tracks identification and Qfield utilisation. Qfield is a good and simple way to input data digically and with details such as : GPS points, the species, the tracks, pictures and other information who are important to collect. The other specie's tracks will be written as accidental observations because even if we can use these datas they aren't the species we want to monitor.

On the 23th of December Catalina DRAGOI, Robert ELES, Alin ALIMPESC and myself, went on the field for a chiroptera monitoring in Cioclovina cave. The management plan include the monitoring of 8 species within the park : bear, wolf, lynx, wild cat and 4 species of chiroptera (Pipistrellus pipistrellus, Rhinolophus ferrumequinum, Myotis myotis and Rhinolophus hipposideros). This monitoring was made in 2.5 hours, the protocol applied was the counting and identification of the species that we saw. At this time of the year it's the most adapted protocol because bats are in hibernation. Other protocols, which are done with technological equipment, are usually done in spring or at the beginning of summer when bats go out of hibernation. Here under these circumstances, we had no other choices than to choose this protocol in order to disturb them the least.

As a final result, Every species was found. During this monitoring, I could also learn a bit more about the cave history, its human utilisation over the time and its natural formation by Catalina explanations. I already had experienced a bats monitoring during my studies, but here I experienced a new monitoring technique. In France, I assisted to a "no-official" monitoring who only showed us the tools used as the high-frequency detector, each species emitting a different frequency. In Cioclovina cave, where only us had access, I assisted in the counting with the biologist but I didn't really participate in the datas collection. And for many different reasons : there are 4 species within this one cave, each of them have particular characteristics not really easy to distinguish naked eye and finally because these caracterictics's recognition from far away is a little bit complicated for a beginner like me. However, this gave me the chance to initiate myself to chiroptera identification and gave me the desire to learn more about this species, bats being the park's symbol.

Well, now that I describe a bit more the work that I did I would like to end this post by talking a bit about the country, its landscape and the kind of people that live here.

You may have heard about the Romanian reputation, but don't misunderstand the Romanians with the transylvanians ! As people explained to me, The mentality is quite different in this region, people are nicer and more welcoming than the other region (and I can certify). I met a lot of wonderful people with kind hearts who were alway trying to help me when I was in a difficult situation, mostly because I can't speak to them and they don't understand english most of the time. My training masters are both amazing and always kind to me which is really delightful wherever it is to work or to hang out together. Unfortunately, my poor romanian and the covid situation didn't give me the opportunity to meet other people except the office's staff but I found another nice solution to fill my free time : discover the natural landscape and historical sites all around the Carpathian mountains !

You may know or not but at a certain period of history Transylvania got a high influence from the Dacian civilisation and hungarian culture. Therefore, today there are still a lot of historical sites and monuments about this period, even the Natural Park has protected historical sites from the Dacian civilisation. Transylvania got a lot of mountains : the Carpathians. These mountains are wonderful and a lot of them are protected by other natural parks, national parks or natural reserves thanks to their particular natural habitats, historical sites, geology, fauna or flora. In winter there are a lot of roads which are closed because of the snow, but I took my chance once and I rented a car and I tried to take a road in the middle of a valley during the winter (My best idea).

So, I rented a car for 3 days and I took these days to visit a maximum of natural area around me and that was freaking amazing. As I love driving and it wasn't really possible to hike (With snow and bears, let's say it's not really safe as I'm alone) I made different parcour to do with the car in 3 different parts of the Carpathian mountains. Now, I will stop my explanations here and let you enjoy the (hundreds) pictures that I took during this short holiday.
Retezat National Park's Montains
Lost in the middle of a snowy valley and later around a incredible lake
Well, I guess that's how it ends. Thanks for reading this and maybe see you later for a new post about the ending of my internship !